We have a winner! The lucky reader who gets Confessions of a Catholic Cop is....Bob G.!

Please email me your contact information and address so you can get a special delivery and your own copy of Thomas Fitzsimmons' novel. Enjoy!
Posted by Momma Fargo at 7:17 PM 7 comments:

I often get absorbed in the characters in a book. If it's good. I guess it's an escape.

When I was a kid, I would often get in trouble because I would hide under the covers and read until late into the morning. I was addicted then. I guess I still am because every time I'm in a book store, I spend the family fortune. It's like crack, only legal.

Sometimes my purchases collect dust until I get to read them during the time snow falls. Turning pages is the greatest place I can get away from reality when I need a break without being in a straight jacket. And I prefer a REAL book...made of paper products.

Rarely do I get to read except after landscaping season. I do, however, have several started. I finished one recently because I couldn't put it down.
Have you ever read Confessions of a Catholic Cop by Thomas Fitzsimmons?

While I was lost in the last pages of the book....I was assigned to guard duty at the ICU room which housed one of our State Park Rangers who was shot Friday night by a drunk driver in the line of duty. The bad guy was killed.

The good guy is recovering and very lucky. He is an honorable cop. This watch with THE ROOK was just something you do with honor and sorrow. I have been there for several of my brothers involved in a police shooting throughout the years. I hope it is to be the last, but the changing of the times may tell a different tale.

The Park Ranger was sleeping while I read Fitzsimmons's novel, so I read some passages out loud that he may not remember and I talked about the book to THE ROOK, an avid reader himself.  I will pass it on to THE ROOK tomorrow for him to enjoy.

Fitzsimmons describes his characters in such detail and since he is a former NYPD officer...they have a lot of New York flavor. His lead detective, Michael Beckett, is full of core values and a decorated police officer. You can't help but like him. I felt his heaviness of being somewhat burned out or ready for a change after so many years on the force...the flip flop of cop drudgery. Perhaps he is even distracted by his other career move. Yet, he still chooses to do his job well and tackles the investigation with determination to seek out the perpetrator. He can't help it. Like any good cop, he likes to unfold a mystery. Oh, and yes, there is a girl.

Vinnie D'Amato, Beckett's partner, actually wore me out. Fitzsimmons built his character in a such way that I felt his burdens, was frowning at some of his moves, and hoping for him to pull himself out of his misery. After all, he's a cop. And cops are good. I can't tell you what happens, you will have to read it for yourself.

The book is full of twists and turns to keep you intrigued along the way. It has political corruption, cop humor, and of course, a bad guy or two. It definitely brings you to the streets and it takes you to the thin blue line.

I will be picking up my next novel from Thomas Fitzsimmons. Soon.

Confessions of a Catholic Cop is well worth the read.

************************
This is the first review I have ever done on my blog. No pressure or coercion. Thomas didn't even have to read Miranda to me before I gave a statement. I truly liked his writing style and perhaps I connected with the book because I am a cop. I was very honored to have reviewed Confessions of a Catholic Cop and with that...enjoy the famous man below...

Thomas Fitzsimmons didn’t need to hire a team of researchers to write gritty crime stories. For Fitzsimmons, it was as simple as recalling his life.Fitzsimmons was raised in a family of career cops in an Irish neighborhood in the Bronx, New York. After serving in the U.S. Navy, Fitzsimmons joined the New York City Police Department. During his 10-year career in the South Bronx precinct dramatized in Paul Newman's “Fort Apache-The Bronx,” Fitzsimmons notched numerous arrests, collaring armed robbers, drug kingpins, and arsonists. Currently, Fitzsimmons is a top security consultant to celebrity clients nationwide. A recognized security expert, he has appeared on television shows including “Good Morning America,” “Geraldo Rivera” and “Montel Williams.” 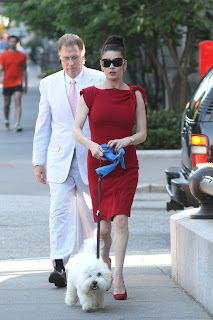 Q & A WITH THOMAS FITZSIMMONS


Fargo: What inspired you to start writing books?

Thomas: Working as a street cop in the highest crime area in the USA inspired me to start writing books. The terrible things I saw on a daily basis affected me—most I will never write about. I think I always wanted to express myself artistically. I can’t sing, or play a musical instrument. When I left the force, I became a lukewarm successful actor. Worked the soap operas, a few films, and TV shows, (in which my character was killed off pronto), and stared in about 150 TV commercials. But I didn’t have any passion for acting—maybe because I was a really lousy actor—or anything artistically until I tried writing. Writing became therapy for me; a catharsis.

Fargo: Talk about developing Mike Beckett, your character in Confessions of a Catholic Cop, and how he may or may not parallel your own persona when you were a police officer and an actor.

Thomas:  Michael Beckett shares my values. He acts in the same manner I did when I worked the streets of the South Bronx and when I was acting. But Beckett, and all of my characters, “speak to me.” (Does this mean I need a shrink?) I don’t consciously develop them. Sometimes I feel more like a medium then an author. The characters do their thing, I’m their audience.

Fargo: Which one of your books are you most proud of and why?

Thomas: To an author, books are like our children, they are part of us. I feel the same about everything I write.

I am very excited to give a lucky reader their own copy of Thomas Fitzsimmons's book.

In one comment-one entry per person- tell me why you want to read his novel.

“Confessions of a Catholic Cop”
The rough streets of the South Bronx - home to countless gangs, pimps, and hustlers.  Where a gunshot is as common as a baby crying and a day without a murder is an oddity.  This is where 10-year police veteran Michael Beckett has spent his career.

When he lands a walk-on role on “Law & Order,” Beckett hopes to trade chasing criminals for a new life in front of the camera…and maybe even to settle down with the show’s beautiful writer, Solana Ortiz.  But when Solana’s South Bronx neighborhood goes up in flames in a string of arsons, Beckett must put aside his caviar dreams and do what he does best – police work.  With the help of his fanatical partner, Vinnie D’Amato, Beckett unlocks a heinous scheme that reaches into the deepest pockets of power and greed in New York City.
Posted by Momma Fargo at 12:21 AM 13 comments:

BUG:  Mom, what's this song about?


ME: I don't know. Sounds like something you would listen to while on Esctasy.


ME: Never mind. It's a happy song. Catchy beat.


ME: Hmmm. Faster than my bullet. You are right. It's about violence.


BUG: I think it's about a nice house. I don't understand why a kid would be jealous of another kid with a nice house or want to shoot him because his house is nice.