Without Fear Or Favor

Read a book about some strikingly familiar circumstances...

Without Fear or Favor by Robert Tanenbaum was a page turner. Of course you have every cop's attention when you start shooting police officers from the get go and work up to a network of  sinister criminals who are undermining the system. What system? Everything...social system, justice system, etc. Karp is in the mix to sort it all out. There are many players including Karp and his wife. Some of the cast are unlikable subjects. Some are surprisingly tangled in many conflicts.  They all come together to pull you into the novel.

Filled with complicated and very animated characters, I found Without Fear or Favor a great read. It is full of conspiracy, thrills, and danger. Additionally, the story contains mirror images of what we see today with the civil unrest and public distrust of police. 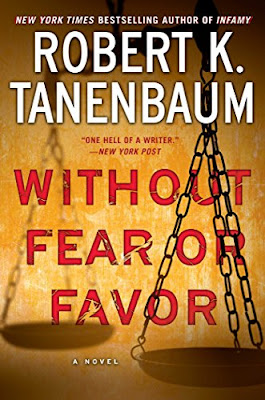 However, Mr. Tanenbaum brings new lively twists to the chaos. Karp is a personable hero charged with figuring all this out with his emotional intelligence and legal expertise. He has that investigative instinct.

What I like the most was that Tanenbaum's writing brought me right there. I was in the moment alongside Karp. I saw what the bad guys were drumming up. I felt I could do a 360 around any environment and know the images, smells, sounds, and conversations. It drew me in and was a fast read until the last page.

Throughout the book, I had mixed emotions after reading about the constant racial turmoil and behind the scenes wrongdoings which had oodles of criminals running amok. Those issues do that to me in real life as well. This just reinforced the frustration I have. This isn't a bad thing. It makes the words all that more believable.

This is great writing. It makes you feel. It makes you hang in suspense. It makes you edgy, waiting for the what grabs you around the next corner. There is normal justice system doings blended in there as well.

I'm sure those watching me in the doctor's office or out on my porch could see a frown once in a while. I literally would get mad at the bad characters or point at the pages and know what was going to happen was not favorable to the good guys. Too bad we can't just reach in there and shake them up a bit and change the story line. Wouldn't that be fun?

It seemed hardly fictional. More like it wasn't just "based upon" a conglomeration of true stories and real life problems, but it was today in the real world: a true criminal dictation.

Butch Karp barely sounds like a lawyer. I'm just kidding-cop/prosecutor humor inserted there. I think he might be a sort of  "Mary Sue" -or for the male roles:"Marty Stew"- character which may familiarize us with Robert Tanenbaum himself. You might even think Karp is a cop- gone-to-law-school type you would find in a big metropolitan area. Maybe he closely resembles a smart cowboy district attorney I know from out west. But he does have some New York flavor for sure.

Perhaps he is an attorney with a cop mind. Maybe. He's intuitive and persistent.

Karp knows the system and knows something isn't right. It's all wrong.

You know Mr. Tanenbaum knows his way in and out of the legal system and is a legal expert. But the book is not going to drown you out with overbearing jargon or legalese. Without Fear or Favor could be a modern social problem unfolding with incompatibility between many viewpoints of the issues. Who knows? See what you think.

He has quite the remarkable history. The following is provided to me by his agent:

So let me give you some of his background and it should impress you, "Mr. Tanenbaum is one of the most successful prosecuting attorneys, having never lost a felony trial and convicting hundreds of violent criminals. He served as Deputy Chief counsel for the Congressional Committee investigation into the assassinations of President John F. Kennedy and the Rev. Dr. Martin Luther King, Jr. He also served two terms as mayor of Beverly Hills."

Without going in to too many of my past cop details, I am really interested in his investigation into JFK.

Robert K. Tanenbaum is the author of thirty-two books—twenty-nine novels and three nonfiction books: Badge of the Assassin, the true account of his investigation and trials of self-proclaimed members of the Black Liberation Army who assassinated two NYPD police officers; The Piano Teacher: The True Story of a Psychotic Killer; and Echoes of My Soul, the true story of a shocking double murder that resulted in the DA exonerating an innocent man while searching for the real killer. The case was cited by Supreme Court Chief Justice Earl Warren in the famous Miranda decision. He is one of the most successful prosecuting attorneys, having never lost a felony trial and convicting hundreds of violent criminals. He was a special prosecution consultant on the Hillside strangler case in Los Angeles and defended Amy Grossberg in her sensationalized baby death case. He was Assistant District Attorney in New York County in the office of legendary District Attorney Frank Hogan, where he ran the Homicide Bureau, served as Chief of the Criminal Courts, and was in charge of the DA’s legal staff training program. He served as Deputy Chief counsel for the Congressional Committee investigation into the assassinations of President John F. Kennedy and the Rev. Dr. Martin Luther King, Jr. He also served two terms as mayor of Beverly Hills and taught Advanced Criminal Procedure for four years at Boalt Hall School of Law, University of California, Berkeley, and has conducted continuing legal education (CLE) seminars for practicing lawyers in California, New York, and Pennsylvania. Born in Brooklyn, New York, Tanenbaum attended the University of California at Berkeley on a basketball scholarship, where he earned a B.A. He received his law degree (J.D.) from Boalt Hall School of Law at the University of California, Berkeley.   Visit RobertKTanenbaumBooks.com.

Momma Fargo:
Sounds like the kind of book that has serious roots in the 21st century's societal issues.
I'll take a stop to his website and check things out.
BTW< you had to add another on my "read" list, didn't 'ya?
(heh)
I want to also dig into his JFK gig.

Thanks for the critique`

I have read some of Tanenbaum's books in the past and enjoyed the read. I find that any book whether it's fiction or non-fiction that deals with injustice raises my blood pressure. Having your background it has to even be more so.

I definitely will order the book.