The Theory of Explosions

My dogs have found a new pastime: raiding the garbage. Like I starve them. They are fat and get fed every day with real dog food. Somehow, they have discovered that people food is dessert. Gah. That gets followed by rapid butt explosions that yours truly then has to clean up. Gross.

That's the excitement in my life. School, work, butt explosions.  There are times I feel like I have it together and other times when I think I might short out. You should be jealous.

My act is not together. I am certainly slipping in mental capacity. I stress about my memory in class. Right now, I was studying for a test today (last minute cram) because if I walk 5 feet, I have forgotten everything. And as I was concentrating on monkey species, I blew up a pan of tomato soup on the stove. Like everywhere. Whiskey. Tango. Foxtrot. 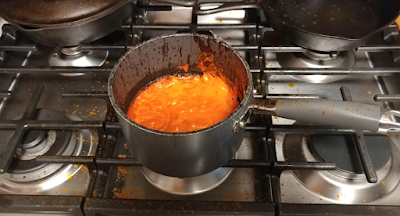 Yep. Beat me. I hate to clean.

Is it stress overload or the beginning of dementia? That is my fear in life: losing my mind for reals. I can deal with the cancers, the heart, the kidneys, the liver, everything else. Two ways I do not want to go is by suffocation (asthma related illness) and Alzheimer's or dementia.

So back to the present: I have to go buy a new pan. It was my only saucepan. But first, clean. Yuck.

So, the moral of this story is that bad decisions lead to unexpected explosions. Make better choices. Maybe I should tether myself to the stove when I start cooking. One thing is for sure, I am not going to be home when the butt explosions kick in. I might leave that for the rest of the household.

I did not die.

Right now I should be doing research, but instead I am writing about the latest and greatest in news, politics, and policing.

Today's post is brought to you by a glass of Gnarly Head red wine. DO NOT even go there. It's good wine. And cheap. Stop. It.

I have a couple book reviews to post but due to my yucko schedule, I am not sure if I will get to them for a couple weeks.

Last night while doing homework, I watched the State of the Union address. It amused me. I trolled Twitter and the interwebs to see the critics go to work. Oh boy did they. But what did they report?  A 76% American public approval rate and no Pinocchios. In fact, not much to give the Democrats anything to scoff at which made them even more upset. Oh there were a few groans and frowny faces, but not your usual hell, fire, and damnation.

Nanci Pelosi took the house with Most Animated Facial Expressions and the Rudetooti Honor. The woman and papers at SOTU. I mean, was she doing her taxes? Was it a thank you list for Christmas presents? Was she writing a letter of apology for being stubborn during the shutdown?

Why would you rattle a bunch of papers unless it was for rudeness factor? And what was that condescending clap thing about? Like her approval is going to make a difference to the American people? I'm sorry I try, but I can't like her for anything.

Kamala Harris won the Grumpalumpagus Award. She could kill me with one look. It was obvious she was miserable and dying a slow, painful death. Could you imagine her as a prosecutor? *shudder* She actually has a pretty good court room interrogation presence.

AOC took away the Stone Face Crown. However, I think it was done in order not to smear her perfect application of lipstick. 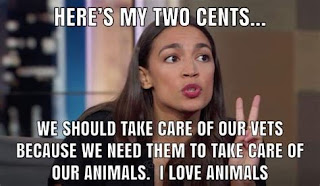 It did pop! She can wear it and look amazing and even appear to have some fashion class. But, only if she doesn't speak.

Oh, the men were there.

Meanwhile Schumer got the Sch-muck of the Night. Is it just me or does he remind you of the face of irrelevant? Is it just me? It is, isn't?


Yes, I did also pay attention to the Republicans. They cheered a lot even if they did not pay attention. I think they were just following along with the wave. Hatch and McConnell and others were probably holding their breath in anticipation that Trump followed the teleprompter.

After all, he tends to go off the rails.

I hope they think about how long they can pause breathing. At their age, it might be dangerous. Actually...(just remember "actually" is a sign of lying) the old guys are important to level out the young cuckoo types (AOC). I think POTUS made a stab at socialism for Bernie and AOC. They did not flinch a muscle. It's like they had starch in their faces. You would think tho, that it would have worked on Bernie's wrinkles. Ah, you gotta love the guy. He looks like a crazy science teacher.

On the other hand, Ted Cruz appeared to act like he had a bowl before SOTU or tucked a little flask  in his jacket or something as he was gleeful the entire time. I mean, how can you be that happy.

Perhaps the up and down and clapping after every 3rd word was similar to elementary games in PE. It brought back happy memories.

Well, anyhoozle. Here I am. It is time to hit the hay. More for another day. I will get around to reading my peeps more often. I have been around seeing your things, just not getting a chance to comment. I also have some more stops to get to as I have been taking the short train to get through the days since I am working about 12 hours or more a day.

It's the American dream.

I'm not complaining. I'm employed and insured and digging myself out of a hole after starting over. It's all going to be excellent! I am in the right place, molding young minds. Like moldy. For reals.
Posted by Momma Fargo at 10:49 PM 6 comments: