Robert McCaw's Off The Grid

Already at the dedication, you can tell Robert McCaw has a soft spot for love. From the devotion to his wife to the exquisite setting in Hawaii...I'm beginning to think he is somewhat of a romanticist.

Off The Grid really is not a love story, but the author's personality is evident from the beginning to the end-which might include some traits of a dreamer. He also gives attention to finite details. I say all this as a compliment.

But, do not let my teasing fool you. You should know by now, I am not a fan of romance novels, so why would I start now? Exactly. Off The Grid is a murder mystery.

McCaw writes a vivid tale which flows like butter and plays to your imagination.

I am not even exaggerating.

You also should note that I am booked with applying for admission to a doctoral program, teaching, research, and working on my thesis for my second master's degree. Why is that important? Well, I do not have a lot of time for pleasure reading anymore which is a crying shame. Therefore, I have delayed my readings. I have picked up many books without completing them. The bookmarks in them tell the sad tale.

Nothing gets a book worm like the feel of a good book...the pages, the weight, the smoothness of the paper. The cover is so beautiful. The colors. Yes, I sound like a sicko. If you are a nerd, you will understand.

I took a day off of school to have some "me" time.  I could not put Off The Grid down.

Therefore, my studies suffered a little. The good news is the font size is perfect for old eyes so I could actually read without a magnifying glass. Like I said, the cover is beautiful. The words are like perfect choreography if words could dance. It grips you. 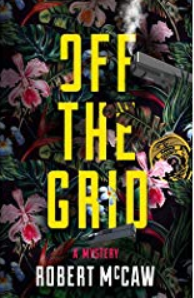 He puts you there: in the shoes of the main character, Chief Detective Koa Kane.

Something refreshing was the melting pot of players and cultural aspects in the book.  It wasn't flat. The portrayals were endearing as if the author had an affinity to the lands and people.

To set the entrance scene, McCaw describes Detective Kane's first view as: the "plume of smoke steam rising like a sulfur cloud from a volcanic vent".  Picture yourself in your company ride pulling up to the fiasco, exiting the car, and scanning to get a first glimpse of the response location. Wow.

Yes, this is his first impression of a crime scene. It grabbed me right away and I started to put myself in character as Chief Detective Koa Kane.

As you walk along with Kane, you want to identify the victims as much as it gnaws at him. The unknowns and the suspense keep you interested. Little by little, Kane puts it together.

McCaw's meticulous writing came with every page, from the character building to the proper accents on Hawai'i...all with a dose of tropical presentation. He tells a story very well.

The law enforcement side is relatable to those of us in the profession which even includes how accurate the LEOs' dialogue would be between peers: both recruits and veterans.  Koa and I are on similar pages.

For example, "he believes in rigorous training, but it is no substitute for brains." Exact words. He gives you a detailed manifesto of his competencies he expects out of rookies and other officers. Of course, they are noble qualities and he has little tolerance for boob boots...just like me.  His jargon is on point as are his police procedures.

Perhaps I am more like Joe who is described as an obese man who moves like Spiderman. He curses like me, too. Nope. He is too tech savvy to be a Fargo. Joe is a fantastic addition, bringing in no nonsense, technological know-how, and humor.

I really enjoyed the international intrigue and the realism of government interference which added to the unexpected twists.  You hate them, you love them, then you hate them all over again. Different missions. Are locals supposed to mesh with the feds? The jury is still out on that. But what if the feds are inherently bad? Additionally, the Chinese government officials add to the mix.

If this isn't enough, a big deal political rally is being held, so the security of public officials is key. Furthermore, public safety is always an issue. Coordinating through all the rhetoric and government run-around seems about par for the course. Kane keeps stumbling on to new leads which steer him into unanticipated directions.

Detective Kane even has retrospective points where he thinks back on a previous memory and plays the "what ifs". Like when he envisions the killer planting the bugs which is a risky move in the first place, but yet, it is more than that. It is a true violation of space and privacy, the kind that gets you in the gut.

Off The Grid is contemporary with real world mirroring of political chaos, policing, and spy issues. McCaw's conspiracies seem authentic which might come from his work experience.  Rooting for Kane to get to the bottom of every puzzle was fun. There were instances when I was tense and times I was relieved. Those are great reader moments.

McCaw has a unique artistic talent. Off The Grid is smart, crafty, and original. I would highly recommend you pick up a copy on Amazon.

(It is even reasonably priced for the quality of story and length-bonus!)

You won't be disappointed...well, except when you finish it. Putting this book down is like missing a best friend. 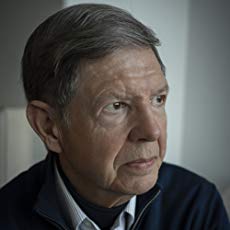 "Robert McCaw grew up in a military family traveling the world. After graduating from Georgetown University, he served as a lieutenant in the US Army before earning his law degree from the University of Virginia. Thereafter he practiced as a partner in a major international law firm in Washington, DC, and New York City—and maintained a home on the Big Island of Hawai’i. McCaw brings a unique authenticity to his Koa Kāne Hawaiian mystery novels in both his law enforcement expertise and his ability to portray the richness of Hawai’i’s history, culture, and people. "

Momma Fargo:
I always enjoy your book reviews.
(looking forward to more when time allows.)
As for you going for that SECOND master's degree?
Well, that'll be two MORE than I have,...lol.
Off The Grid looks to be very good, from what you told us.
(I'll add it to my list).

Keep on keeping on.


Your Site is very nice, and it's very helping us this post is unique and interesting, thank you for sharing this awesome information. and visit our blog site also sattaking